MELVILLE, N.Y. — Sept. XX, 2017 — Ekstraklasa Live Park, the broadcast arm of the top Polish football league Ekstraklasa, has signed an agreement with ChyronHego to equip all 16 of the league’s arenas with the award-winning TRACAB™ image-based tracking system by the end of this year. TRACAB will enable live tracking of all movements of players and the ball on the field, and Ekstraklasa Park Live will use the resulting player performance data to enhance its live coverage of close to 300 LOTTO Ekstraklasa matches.

“Implementing tracking technology within our stadia will help to further  improve LOTTO Ekstraklasa TV broadcasts & the overall quality of our product. It means that we will be collecting match data at the same level as that of other top European leagues. Thanks to the close cooperation with ChyronHego, the value of our league will significantly increase. This is also important in relation to the sale of our media rights – from the 2019/2020 season. We want to share this data not only in TV broadcasts, but also in media reports, on our on-line channels and in the future – in our mobile app. After installation of the system in all of our stadia, we will also be helping coaches & coaching staffs by providing them unique fitness data. These analysis were never available as a common approach among polish clubs. And that’s how we understand our supporting role in teams development.” said Marcin Animucki, Vice-President of Ekstraklasa S.A.

With a special camera array at each LOTTO Ekstraklasa stadium, the TRACAB optical tracking technology uses advanced image-processing and data-extraction technology to determine the position of all moving objects in the field of play — including players, referees, assistant referees, and the ball. The result is a live data feed that contains the X, Y, and Z positional coordinates for each identified object. The data can then be streamed in an open format to a multitude of visualization platforms, such as broadcast graphics systems and online or mobile platforms, and it can also be used to prepare comprehensive sets of performance statistics for sports analysts.

“Each season, we try to raise the quality of our broadcasts. The introduction of the player tracking data to our live TV programming is an important step, because it brings our coverage up to par with the best leagues in Europe,” said Marcin Serafin, COO of Ekstraklasa Live Park. “We're especially happy that the data can be used not only to enhance the fan experience, but also by the coaching staff to improve player and team performance. TRACAB’s high-quality, highly detailed data is a powerful new building block as we continue to raise the level of the competition in LOTTO Ekstraklasa.”

After every match, the TRACAB data will be shared with the competing LOTTO Ekstraklasa clubs and will also be presented on the Ekstraklasa.org official website and all social media channels. Examples of the types of data captured include distance covered, number of sprints, speed of movement on the field, maximum speed, and average position.

“It’s a privilege to add LOTTO Ekstraklasa to our expanding list of top football leagues and the largest international tournaments that have chosen TRACAB, such as the Premier League, Bundesliga and La Liga, as well as some of the largest international tournaments” said Rickard Öhrn, ChyronHego’s president, EMEA. “The technology is becoming accessible to more and more leagues as they realize the live data and the applications that TRACAB can drive and the value it can create for a wide range of stakeholders.”

More information about TRACAB and ChyronHego’s full product portfolio is available at www.chyronhego.com. 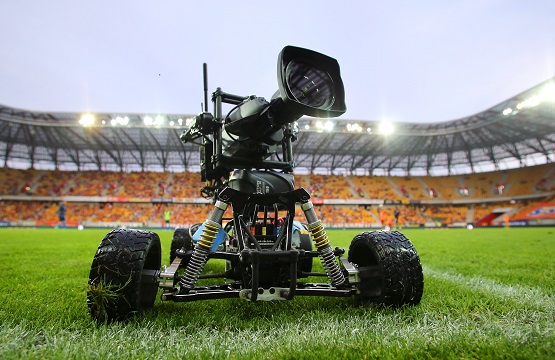 About ChyronHego
ChyronHego, a portfolio company of Vector Capital, is a global leader in products, services, and solutions for the broadcast and sports industries. Specializing in live television, news, and sports production, ChyronHego offers some of the industry’s most widely deployed solutions — including Lyric®, the world’s most popular broadcast graphics creation and playout offering; the all-new CAMIO Universe newsroom workflow; and the TRACAB™ optical sports tracking system. Headquartered in New York, ChyronHego also has offices in the Czech Republic, Denmark, Finland, Germany, Mexico, the Netherlands, Norway, Singapore, Slovak Republic, Sweden, and the United Kingdom.

Ekstraklasa S.A. is a joint-stock company, established on June 14th 2005, thanks to terms agreed upon between PZPN and football clubs who were then part of the 1st league.  Shareholders of the company are 16 clubs from the highest football league (each with 5.8% shares) who together hold 92.8% of the stock. 7.2% of the stock is held by PZPN (Polish Football Association. Company manages competition of highest level of professional football league in Poland. In LOTTO Ekstraklasa there are 16 best clubs from all country. In each season TV & on-line audience is bigger than 35 milion and almost three million watch competitions at the modern stadiums.