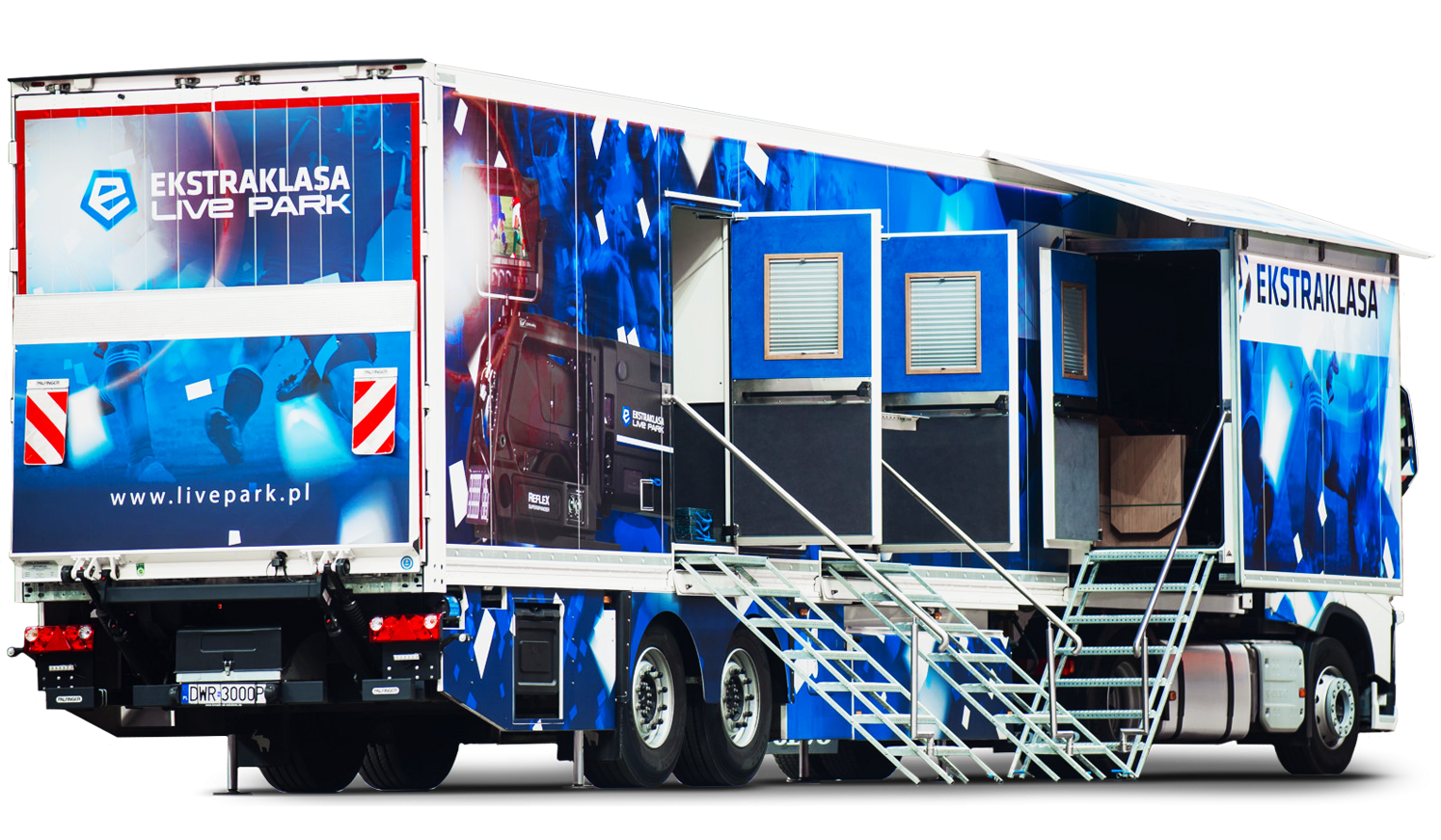 Our OB is based on a reliable solution with the technology installed on the trailer. So even in case of a tractor failure we are still able to reach the destination and be ready for the production with the „state-of-the-art.” technology and professional crew involved.

Extension of the production area creates 9 comfortable work places equipped with intercom panels and easily managed multi viewers for each position. In case one would need another person in the Production Area, additional work space can be created using fold-down table in the second row. There are air condition, parking heater and floor heater units for the crew convenience. To top-up the work comfort there is 5.1 system available for the first production row allowing to hear the audio as a surround sound.

Next to the Production Area there is an Audio Area in the middle of the truck with enough space for comfortable operations of two. The Sound Engineer has the ergonomic sound console, 5.1 surround sound system and other tools required for the advanced audio operations. There are also two video monitors – one with the multi viewer.

The audio area can be separated from the two other areas with the doors allowing to cancel all unwanted sounds disturbing the Sound Engineer operations. There is also a parking heater and air-condition system available in the room.

Behind the next door there is a Shader’s workspace as well as an operational access to the racks. There are 3 positions for Video Shader’s and/or EIC from where 12 camera chains can be managed (one Super Slow Motion and one Ultra Slow Motion), plus 2 effect cameras and 1 wireless unit. There is also a KVM unit allowing access to all OB’s subsystems as well as an access to the equipment installed in the racks. The racks have wooden/glass, sealed doors making the room silent and comfortable for work.

There are also two other rooms in the trailer. One of them is Storage – the place where all the field equipment is being stored and the other one is an EIC work space. In case of advanced productions EIC workspace can be transformed for other purposes as there is a multi viewer and KVM output on the 46” monitor as well, as an intercom and rtr panel. From this room there is a service access to the racks making service jobs comfortable.

TAKE A LOOK AT THE VIDEO FROM THE TRUCK

There is a moveable GrassValley’s Karrera switcher panel for the main Video Director/Switcher and his assistant in the Production Room. The switcher is equipped with 64 inputs and 32 outputs and licensed for 3 stripes – PGM and two M/Es, 2x ClipStore channels based on K2 Solo and Image Store with 16GB of internal cache. There are two chroma keys and two iDPM channels (Integrated Digital Picture Manipulators). Clip Store has more than 10 hours of storage for the Video materials consisting of video and key signals + audio. Image Store supports the short video as well (2 channels of video and key during recording and 10 channels for the playout) - up to 14 seconds long. It is very useful when it comes to various animated transitions or backgrounds. Image Store can store up to 2000 frames consisting of video, and key signals. It supports GIF, JPEG, TIFF, BMP, PNG, Kalypso and Kayenne/Karrera graphic files and AVI, MOV, MP4, PNG and TGA for the video files. Each M/E stripe is equipped with 6 keyers, each with 2DPM effects (resizers) and there 999 Macros and 1000E-Mems available for the user. If the hardware panel is not enough there is additional software one available with dedicated PC keyboard allowing to control one M/E stripe. So it is possible to have two independent production streams each one controlled by the separate controller.

There are 6x 46” NEC LED panels in the production wall displaying multi viewers outputs of the Imagine Platinum Multiviewer/RTR. The matrix is 128x72 and the Multiviewer has 3 heads in total (1x 64 inputs and 2x 32, with 6 outputs on each head) allowing to display 128 independent pictures in total on 16 monitors available in the truck. So we have 69 PiPs on the monitor wall for 5 working positions in the first row: Video Director/Switcher, Video Assistant and three other people which in our case are Graphics Operator and two Producers.

In the second row of the Production Area there are 4x EVS positions. Each one has a Remote, intercom and VSM panel, monitor with multi viewer output and pre-hearing unit. The multi viewer allows to display 8 PiPs on each monitor what makes the setup very flexible considering changing configurations of two EVS XT3 Channel Max machines. Channel Max means 12 channels for each EVS machine that can be configured according to the supported configurations. Both machines are fully equipped with the software options allowing to record either one phase or multiphase cameras. For the easy management and archive/restore jobs there are IPDirector and XFile3 units in the EVS network.

Having two VSM serwers on board we can configure user panels and interfaces in very sophisticated way to meet the production requirements and OB specification, having the system in redundant control at the same time. Storage groups allow us easily store and recall setups of the particular hardware groups and virtual signals makes the signal paths transparent to the user. Those features, plus many other available in the system makes configuration simple as never before. With just one click we can change the layout of the whole production wall or exchange one signal source with the other, without need to do any other changes in outer parts of the truck (mnemonics, source-to-destination routes, etc.). Also source name changes are made from the VSM system as well, so no need to use dedicated RTR or switcher software anymore.

This is audio sanctuary of our OB. There is a LAWO mc2 56MKII console with three bays equipped with motorized faders (one is a control bay). There are 16 faders on each bay giving us 48 faders in total on one layer. Having 6 independent layers there are virtually endless configuration possibilities and each one can adopt the work space to his needs. Each audio channel can be configured with a basic tools from the side panels and for the advanced configuration the central control panel can be use. In the central bay there is a RTW TM9 integrated sound level meter. It can work with every audio configuration supported by the console.

Surround sound system in the audio and production rooms consists of Geneleck 8030APM speakers and 7050APM subwoofers. In audio room there is an option for pre-hearing of PFL Stereo sound on additional Fostex 6301BX speakers.

Hart of the audio console consists of DSP system and routing system of a Nova73 Compact frame where almost all signal’s routes are fiber ones. At the periphery we have Andiamo MC frame for the analogue signals (96x IN/OUT), Andiamo AES for digital signals (64 IN/OUT), EXBOX64 for EVS MADI signals (128x IN/OUT), Andiamo 2.AD for input signals (32x IN) and Andiamo 2.DA for output signals (32x OUT). There is also RIEDEL Artist 128 intercom matrix for two-way communication of 128 digital signals, RIEDEL MediorNet Compact as an embedder/de-embedder and signal multiplexer.

There are two Vision Control/Technician positions in this area. Both equipped with the VSM LBP-32 control panels, UMDs, Riedel’s RCP1012 panels and Tektronix WFM 5000 waveforms. There is also third position designed for the EIC operation that can be easily transformed into another shader position when needed.

Both shaders control GrassValley cameras using OCP 400 panels allowing them to set-up the operation parameters inside the menu of the camera as well. Between two groups of the OCP 400 panels there is one RCP controlling two LMP effect cameras allowing to manipulate focus and aperture of those mini cams as well.

The EIC position is equipped with VSM LBP-51 control panel, Tektronix WVR 5200 waveform with AUD and LOUD software options, and RIEDEL RCP1028 intercom panel. From this position, thanks to G&D KVM unit, there is an access to all computers working in the OB. Such solution allows to control all sub-systems of the truck from one place. There is also Sonifex pre-hearing unit. In this area there are three reference SONY OLED monitors as well, as two bigger NEC and DELL monitors with multi viewers.

Right behind the back of the Shaders there are rack units with the technology of the truck. Proper temperature inside the rack units is controlled via the advanced air-con system allowing to cool, heat, dry and vent the inside space. Thanks to wooden, sealed doors there is a nice, quiet atmosphere in the shader’s room and the noise of the working equipment is minimized. The whole technology is protected by three 5000VA UPSs with the battery packs enough for 10 minutes of operation without external power (air-con system is not supported).

Storage is a place where the field equipment such as cameras with accessories, microphones, tripods, monitors, lights, etc., are stored and carried while the OB is moving from one location to the other. It is located in the back of the trailer and has two independent entrances – one is a loading ramp on the back and the other goes through the small EIC room with entrance on the side of the trailer.

The EIC position is equipped with the KVM unit, intercom and VSM panel, and one large NEC monitor. There is also a small wallbox allowing to route some video, audio and control signals. Behind the EIC position there is a back side of rack units with the service access to the equipment installed in them.